The leaders and activitists of the volunteer wing of the rulling party began harvesting on Friday morning over 6 bighas of land.

President Nirmal Ranjan Guha said that the leaders and activists of Swechchhasebak League are ready to cut and thresh the ripe paddy of the house-bound farmers at the call of Prime Minister Sheikh Hasina.

Swechchhasebak League stands beside people with humanitarian services in case of any disaster, Nirmal added.

General Secretary Afzalur Rahman Babu said the organisation takes the initiative to create enthusiasm among the leaders and workers of the Swechchhasebak League to cut the ripe paddy of the beleagured farmers.

He further mentioned that leaders and activists across the country are ready to cut and thresh the ripe paddy of the helpless farmers and take it home. 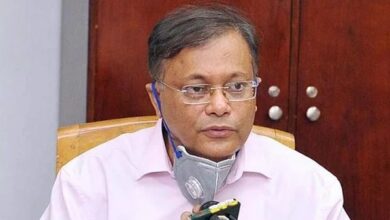