Cristiano Ronaldo has become the all-time record goal scorer in men’s international football after scoring for Portugal against Republic of Ireland.

The forward, who re-signed for Manchester United on transfer deadline day, 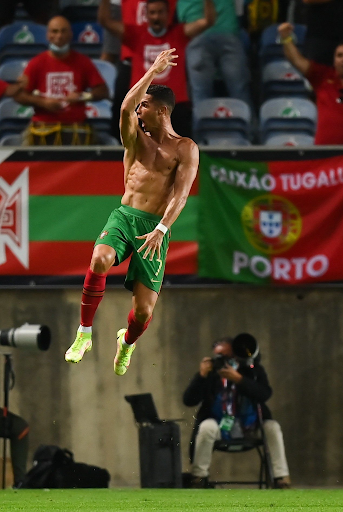 has netted his 110th goal in his 180th senior cap, moving ahead of Iran’s Ali Daei who had been the highest scorer since 2004 – although he was actually named as the record holder a year earlier, as Malaysia’s Mokhtar Dahari’s 89 goals were not recognized by Fifa until 2021.

On Wednesday, however, Ronaldo put himself into first place alone, heading in a late equalizer in the 2022 World Cup qualifier against Ireland after he had earlier missed a penalty. He then completed an injury-time turnaround by scoring a second, his 111th in senior international football, to give Portugal a 2-1 win.

The Irish took the lead just before half time and were set for a shock win until Ronaldo nodded home in the 89th minute with a smart header.

“I can’t even start to express myself in words! I’m thrilled with an overwhelming sensation! Let’s go, Portugal! Let’s go,” Ronaldo wrote on instagram

“From all the records that I have broken during my career – and fortunately there have been a few – this one is very special for me and it’s certainly on the shelf of the achievements that make me truly proud.” he added.

The Body Of The Pilot Nowshad Has Arrived In The Country