India overwhelmed England by 157 runs to win the fourth Test at the Oval on Monday and take a 2-1 lead in the five-match series.

England set 368 to win, were bowled out for 210 after tea on the last day with fast bowler Umesh Yadav taking 3-60.

The hosts were relatively well-placed at 141-2 before left-arm spinner Ravindra Jadeja and paceman Jasprit Bumrah both struck twice as England lost four wickets for six runs in 36 balls after lunch.

Star batsman Root, bidding for a fourth hundred in successive Tests, then played on to Thakur for 36 to the delight of India fans among a capacity crowd revelling in the south London sunshine.

And on the stroke of tea, Chris Woakes chipped Umesh Yadav to short midwicket, leaving England 193-8 and India just two wickets away from going 2-1 up in a five-match series.

England had been in a relatively comfortable position at 141-2 before left-arm spinner Jadeja, again preferred to star off-break bowler Ravichandran Ashwin, was eventually rewarded for a probing spell on a wearing pitch.

Haseeb Hameed, 43 not out overnight, had become becalmed at the crease, adding just 20 more runs in 108 balls on Monday.

But his defence was pierced by a Jadeja delivery that pitched just outside his leg stump before turning sharply and clipping the top of the right-handed opener’s off stump.

Ollie Pope, who made 81 in the first innings, was bowled for two by Bumrah, gaining reverse swing, giving the fast bowler his 100th Test wicket.

Bumrah then took his second wicket in five deliveries when a brilliant yorker clean bowled Jonny Bairstow for a duck.

Moeen Ali was powerless to prevent further collapse, the all-rounder also falling for nought when he deflected a Jadeja delivery that turned and bounced out of the rough straight to short leg. 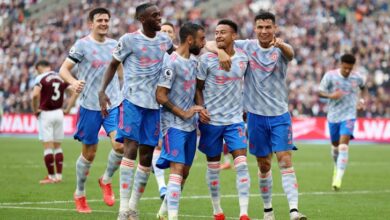