Jammu and Kashmir Peoples Democratic Party (PDP) chief and former Jammu and Kashmir chief minister Mehbooba Mufti Tuesday claimed she has been “put under house arrest”, added this exposed the fake claims of normalcy in the state by the Government of India. She said the step has been taken as “according to the administration, the situation is far from normal in Kashmir”.

“GOI expresses concern for the rights of Afghan people but wilfully denies the same to Kashmiris. Ive been placed under house arrest today because according to admin the situation is far from normal in Kashmir. This exposes their fake claims of normalcy,” Mufti said in her tweet.

Ms Mufti tweeted an image of the locked gate of her house and an armored truck parked nearby. 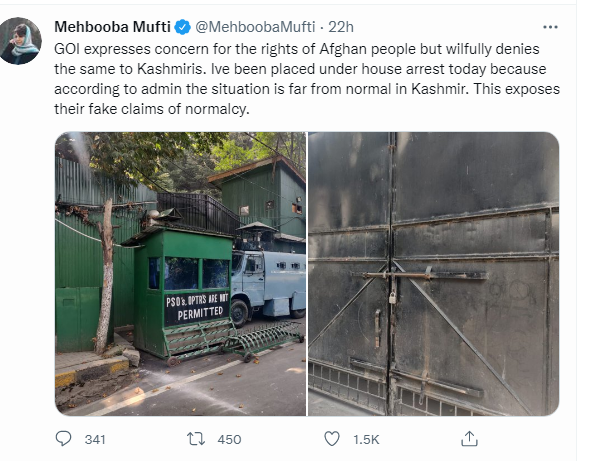 The police said the PDP leader had been requested not visit Kulgam today for security reasons.

“We need lot to make lot of security deployment in the area since Ms Mufti is a Z+ category protectee. We have not put her under house arrest. She was only advised not to visit today,” said a senior police officer.

Ms Mufti’s allegation comes as the Jammu and Kashmir police said most of the restrictions have been eased and internet services have been restored in the region. The restrictions were imposed after the death of separatist hardliner Syed Ali Shah Geelani.

Syed Ali Shah Geelani, 91, died on Wednesday and was buried hours later near his home in Srinagar amid heavy security to forestall any protests and gatherings at mosques.