Visiting the park on Friday afternoon, UNB found the place overcrowded as thousands have already arrived there and they are cooking their lunch.

Monir Hossain, former organizing secretary of Khanjapur Union Jubo Dal of Gournadi Upazila of Barisal district said, 500 leaders and activists have come from our upazila to join the rally. Lunch has been arranged for all of them. “We have made all cooking arrangements for two days,” he said. 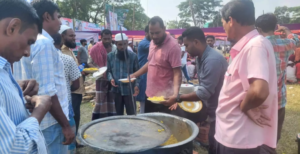 Member Secretary of Khanjapur Union of Swechchasebak Dal, Md. Swapan Howladar said “We’ve come here two days earlier due to the transport strike. We are spending the nights in the field under sheds and making tents with awnings. After Jumma prayer, we all had our lunch under the open sky,” he added.

Roni Ahmed Nasir, literary publishing secretary of Barguna Jubo Dal said, “We are struggling and will struggle more to succeed the rally. But we don’t want elections without voting.”

“We came here facing many hardships. The government has stopped everything. We hired speed boats and hundreds of people came by them,” said Md Shapon Shikdar, a Jubo Dal leader from Bhola’s Daulatkhan.

Earlier, speedboat movement was halted on Wednesday evening while launch on Thursday morning amid BNP’s allegation that launch owners went on the sudden strike as per the government’s directive ahead of the Bangladesh Nationalist Party’s (BNP) divisional rally slated for November 5.

The launch and speedboat services will remain halted till November 5, he said.

However, the launch owners did not disclose any reason behind the strike, he added.

Meanwhile, law enforcers are conducting searches by setting up check-posts at the entrances of Barishal city.

Barishal’s Bangabandhu Park already a sea of BNP leaders, activists
“We are doing this as part of our regular work”, said Ali Ashraf Bhuiya, deputy commissioner of Barishal Metropolitan Police.

The BNP has long been demanding that the next general election be held under a caretaker government, not under any political government–a demand sharply rejected by the ruling Awami League as the constitution does not allow it to happen.

Saturday’s rally will be the fifth one by the BNP at the divisional level as the first one was held in Chattogram, the second one in Mymensingh, the third one in Khulna and the fourth one in Rangpur.

Similar rallies have been planned in other divisional headquarters to drum up support in the run-up to the next election expected to be held late next year or in early 2024.

The BNP will conclude the divisional rallies through a mass gathering in Dhaka city on December 10.