Members of Rapid Action Battalion claimed to have arrested a suspected militant from a house in Mohammadpur’s Bosila in the capital on Thursday.

The elite force brought the detainee, wearing a helmet, out from the house around 7:30 am.

Commander Khandaker Al Moin, Director of Legal and Media Wing of RAB headquarters, confirmed said that RAB have cordoned off a house in Mohammadpur’s Bosila in the capital on suspicion of it being a militant hideout.  One person was detained from the house around 7:30 am. The detainee is being questioned about whether there is anyone else in the building.

The raid is going on, adding that details will be disclosed at the end of the drive,  Khandaker Al Moin said.

10 dead in fire at Covid 19 hospital in North Macedonia 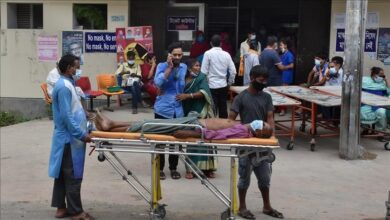